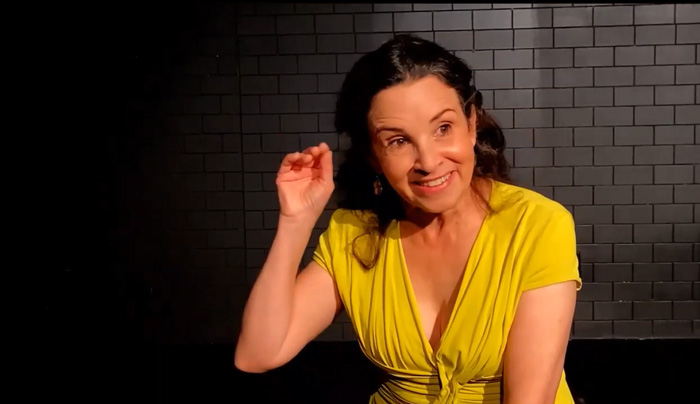 Writer and actor Jennie Fahn will entertain Valley theatergoers with her one-woman show, “Under the Jello Mold,” at the Scottsdale Center for the Performing Arts from Sept. 23-26. The show is based on Jennie’s colorful mother and told in anecdotes, characters and songs. The unique title is an homage to the hiding place where Jennie’s mother, Joyce Kaplan, kept the instructions on what to do upon her death.

Her first one-woman show, “You Mutha! A One-Mother Show,” ran for two years in Los Angeles and was featured in the 2005 NY Fringe Festival. “It was based on different mothers that I knew, including my own,” says Jennie. “It was a successful show, and people loved it. They wanted me to do a sequel, and they especially loved the character of my mom – even my mom loved the character.”

Jennie says that her mom would love to talk to the audience members after the show. “My mother is talking to everybody and telling them, ‘That was me, but I never said any of that stuff. I never actually said any of it,’ and my dad comes up to me and says, ‘You know, it all sounded very familiar.’”

As time went on, and her mother’s health began to decline, Jennie also decided that the show had to change. Because of the character she was, Joyce did everything on her own terms, including her death.

“When I would share the stories about her with people, they would laugh, and when I would talk about her death, it helped people open up to talk about their experiences,” says Jennie. “They would say, ‘I’m so glad you’re telling me this, can I be honest with you?’ and then they would open up about something that they felt was difficult to talk to anyone else about. And I thought this is triggering something that people want to talk about.”

Her mother passed away in 2012, and in 2016 Jennie decided to share a monologue on the topic of her mother’s death in front of the film collective she belongs to, We Make Movies. She was hoping to try the material out and get some feedback, but then someone in the back of the room said, “You have to do this at the Hollywood Fringe Festival, and I’m going to produce it,” and another person said, “You’ll win the Hollywood Fringe Festival with this.”

Jennie was overwhelmed with the positive response. “When someone says, ‘I’m going to direct and produce your show,’ the answer is yes! So then I had to go write the rest of the show.”

She did write the rest of the show and premiered it at the 2017 Hollywood Fringe Festival where it won Best Solo Performance and Producer’s Encore awards and was named ‘Pick of the Fringe,’ as well as earning a nomination for Top Of The Fringe (the only solo show to do so).

“It’s not just for Jewish audiences; it crosses all different kinds of cultures. And it touches people in many ways, and sometimes in ways I didn’t even think of,” says Jennie. “After the show – it’s my favorite thing – I call it the “sidewalk chat” where people stick around afterward and share with me which part of the show affected them. It’s always surprising and wonderful.”

She shares the story of a woman from India who told Jennie that her mother kept her instructions under a bag of jasmine rice. Or the person that shared that their mother had passed recently and they were so glad that they came to the show because they haven’t laughed in a year.

Before every show, as part of her warm-up, she takes a moment to honor her mom and anyone someone in the audience has lost. People often ask her if it’s hard to talk about death night after night.

“It’s hard to talk about death and what you might have gone through at the end of someone’s life,” says Jennie. “It seems sad, but it is a part of life, and it’s cathartic to share the feelings and moments, and it’s joyful to celebrate her.”

Jennie is not the only actor in her family. Her husband, Jonathan, is also in the business and does a lot of voice-over work. He also collaborated with Jennie on a short-form anthology comedy online series, “5-Star Weekend,” that the couple created during the pandemic.

The couple have two children, Harry and Sammy, and Harry is also an actor and has done his fair share of voice-over work with some major players in Hollywood. Jennie recalls the time she took Harry to do some voice-over work, and when he was finished, she asked him how it went.

“He said, ‘It went great!’ and I asked, “How was the director?” and Harry said, ‘He’s so nice, and he went to the same middle school that I go to!’ I then asked him the director’s name and he told me, ‘Rob.’”

The two continued talking, and then the director came out of the voice-over booth. “Out walks Robert Redford. I was like, oh my God, this is Rob, and my son’s on a first-name basis with him,” says Jennie. “I had no idea the nice guy named Rob was him.”

Guess those things happen when you’re a family living and working in LA. For the record, son Sammy is interested in science.

To learn more about Jennie and her work, visit jenniefahn.com.