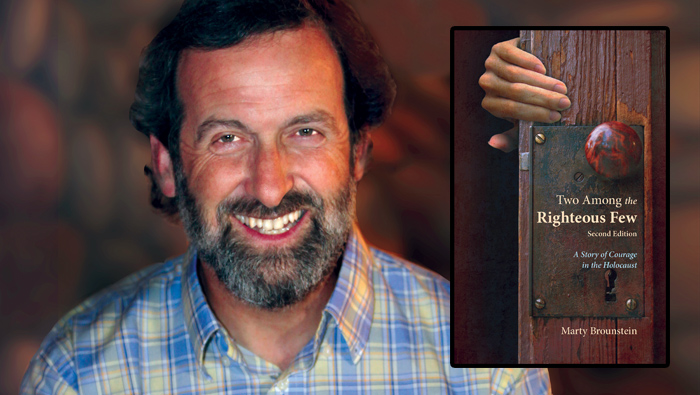 Writing a book was the furthest thing from Marty Brounstein’s mind when he visited the Netherlands with his wife, Leah Baars, in May 2009.

It had been 25 years since Leah had been back to her homeland after her family had immigrated to Northern California. Marty had never been, so they embarked on a six-week journey.

While in the Netherlands, Leah wanted to look up some old family friends with whom she had lost touch: the family of Frans and Mien Wijnakker. Through an information officer, they found the address and also learned that the Wijnakker’s son now lived in the family home.

They were a short distance away, so they drove. There is the front yard sat Frans Jr. Leah introduced herself: “Hello, I’m Ineke [her childhood nickname] Baars,” she said in Dutch. Immediately, the man jumped up and gave her a big hug. “They were both so excited to see each other,” says Marty.

During that initial visit, Marty says two things happened: “Frans Jr. showed us a picture of a memorial plaque to his parents in the Avenue of the Righteous Among the Nations in Israel.” Frans Jr. had taken a photo of the plaque when he visited Yad Vashem. Marty knew it was a big deal for the parents to be recognized in that way. “Then another sibling came over who has a self-published Dutch book about her father, Frans. It created a spark in me and moved me,” says Marty.

When they returned to the U.S., Leah took out the Dutch book and wrote out a raw translation. “It was like a jigsaw puzzle with pieces missing,” Marty explains. “You had just the story in itself.”

Between those resources – information from the Wijnakker children (who have been very supportive) and his own historical research – Marty was able to put the story together, exploring the remarkable and unusual efforts of Frans and Mien Wijnakker. He became what he calls the “humble messenger of these two real heroes.” That was beginning of his book, Two Among the Righteous Few: A Story of Courage in the Holocaust.

More than 75% of all Dutch Jews perished in World War II because of the brutal Nazi occupation and Dutch compliance. Even those involved with resistance groups did not help to hide Jews.

The operation started with a simple call for help. Frans was a risk taker He had a black market business during the war, traveling by train to major cities in the west and selling meat and eggs. This was against the law. In the spring of 1943, on a business trip to Amsterdam, he called upon a doctor acquaintance with whom he had done business in the past. The doctor told him of a young girl in the city whom he wanted to move to the safer countryside; maybe Frans could take her? And by the way, she was Jewish. Unlike most people who would refuse or turn them into the authorities, Frans said yes.

When Frans came home near midnight (taking someone out of the city during the day would be too risky), his wife Mien told him she had been worried sick when he had not come home by suppertime. With him was the 14-year-old Jewish girl with the false Dutch name “Freetje.” Her real name was Shula – and she happened to have a friend down the block whose name was Anne Frank.

Shula Schwarz currently lives in Haifa, Israel. “This past May, we were able to deliver her 88th birthday card to her,” says Marty. Shula remains in contact with the Wijnakker family. She helped Marty with some of the pieces of the puzzle; a young teenager at the time, she has vivid memories of the Wijnakkers.

Frans and Mien saved the lives of at least two dozen Jews in southern Holland during World War II, all while raising four children under the age of five when they started their mission.

Marty has studied other “righteous heroes” and sometimes gives talks where he shares their stories. He realized that they all have certain characteristics in common: “They teach us lessons of making a positive difference and doing the right thing – characteristics that are so important today.”

Having done more than 500 events in the last five years, sharing the Wijnakker’s remarkable journey in his presentations elicits similar responses. “People love the story. I commonly hear from people who have read the book and we have discussions about it,” says Marty, who hears comments like “Amid the horrific tragedy of the Holocaust, I didn’t know there was anything positive.” “We’ve got the positive,” stresses Marty.

He tells the tale of this interfaith story (the Wijnakkers were Catholic) at a variety of venues, including social service organizations, schools, businesses and even parties hosted in individual homes. “Sometimes synagogues and churches will co-host them,” says Marty. “This is an interfaith story at its best. A true one, of all the right things – of respect and caring for one another, regardless of one’s faith.”

Marty delivers the Wijnakker’s story with a warmth and passion that comes from pouring his heart into this project. And for those who attend, Marty reveals a secret at the end of his presentation that makes the Wijnakkers’ tale even more endearing.

Marty will continue his speaking tour through February and into early March. A complete list of public performance dates can be found at martyabrounstein.com.