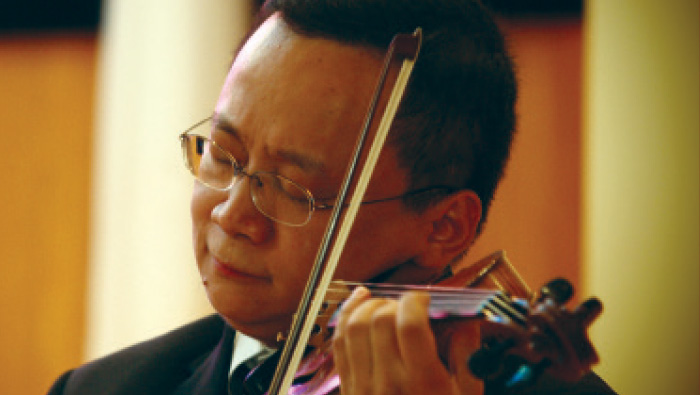 The Jewish tunes most familiar around the globe undoubtedly are the catchy “If I Were a Rich Man” from “Fiddler on the Roof” or the folksy wedding staple “Hava Nagila.” But to generations of Jewish people worldwide, the “Kol Nidre,” with its haunting melody, is the song that most resonates as it brings to mind years of tradition with only the first few notes.

Lan understands the importance music plays in connecting people to religion. “It is very difficult to imagine worshiping God without music,” Lan says. “Music is a ladder set up on the Earth, and the top of it reaches to heaven. It heals, comforts and inspires.”
Though not Jewish, the violinist understands the profound connection the Jewish people have with music and believes that music is an extraordinary gift from God, to be used as a tool to praise and worship.

“As a classical musician, I greatly admire the most accomplished musicians in the world, many of whom are Jewish,” explains Lan. “Music is a universal language that allows me to freely express my feelings and speak my words without any barriers. Playing “Kol Nidre” is one of the examples.”

Lan has played in the Phoenix Symphony’s first violin section since 2003, and from 1996 to 2000 was a member of the China National Symphony Orchestra, one of the country’s most highly regarded orchestras. He has toured and performed in most countries in Europe, Asia and North America. After earning his American citizenship, Lan was honored to play the National Anthem at Chase Field for the Diamondbacks in 2010.

A man who has traveled around the world and played in such esteemed professional orchestras, Lan feels right at home on the bimah at Beth Ami Temple, a sentiment echoed by the temple’s Rabbi Arthur Abrams. “Lan is devoted to the temple, and he has always been available to us,” says Rabbi Abrams.

Indeed, the violinist and his wife were invited to play for a fundraising concert just a week after coming back from their honeymoon in 2013. Though both of the musicians were exhausted after their wedding, they took their violins on their honeymoon in Hawaii to prepare for the concert.

“Lan is a man of faith. He is gracious and very hospitable. He is dedicated to his music, which is of course a significant part of his life,” Rabbi Abrams says. “His music expresses the spirit of life, and he approaches his music with great love and devotion.”

The friendship Lan has formed with the temple’s rabbi and members grew organically from a professional to a personal level, giving the Qiu family a feeling of love and acceptance by the small boutique temple, which comprises mainly active adults. Last year Lan and his wife, violinist Joy Pan, along with their two children, became honorary members of Beth Ami Temple.

“The meaning of honorary membership goes far beyond a nice certificate,” says Lan. “For us, it symbolizes friendship, acceptance, love and a deep bond.”

'Music Man and Mensch: Lan Qiu' has no comments