He still sleeps “with one eye and one ear open – always waiting for the pager to go off.”That’s not necessarily typical for a rabbi – but Robert (Bob) Kravitz isn’t a typical rabbi.
Kravitz recently retired his Phoenix Police Department badge “with recognition and appreciation of faithful service and loyalty,” following 20 years as a volunteer police chaplain. Along the way he assumed a similar volunteer post for the Arizona Department of Public Safety, a role he still holds, along with serving as Scottsdale’s police chaplain. Consequently he is on constant alert to provide pastoral counseling and, in conjunction with highway patrol officers, take part in next of kin notifications.
He recalls his first law enforcement connection in 1993 during his tenure here as area director of the American Jewish Committee. It was in the context of membership on the Human Relations Committee where he got to know then-Phoenix Police Chief Dennis Garrett. When a chaplain at a committee meeting delivered an invocation, Kravitz asked Garrett whether there were any Jewish chaplains.
The answer: “No.” “Do you want one?” “Yes.”

So began an extensive and elaborate process. Kravitz had to supply details about every school and seminary he attended, his training, job history and family background. He passed a polygraph test and oral boards, and took a class in critical stress management “that offered input as to what to do, how to help. It was different from rabbinic training,” he notes. “Basically it was helpful in learning how to diffuse crisis situations.”

When Garrett segued from the police department to become director of the Department of Public Safety for Scottsdale, he invited Kravitz to come along as DPS chaplain.
For civic functions, funerals “or when the Scottsdale police chief requires it,” Kravitz wears a Class A ceremonial uniform, “but for calls that come in the middle of the night,” he says, “it’s a bulletproof vest, shirt and badge.”

A native of New Haven, CT, the rabbi came to the Valley with his wife, Helen, and two children in 1987 to assume the AJC post. Ordained at Hebrew Union College in Cincinnati, OH, he had led congregations in upstate New York (where he met and married his wife of 39 years), Georgia (where their son and daughter were born) and North Dakota. In the latter two posts he also served as a U.S. Air Force contract chaplain.

He describes the AJC job, which he held from 1987 until mid-2005, as an ideal extension of his desire to combine rabbinic training with community involvement. AJC’s mission is to enhance the well-being of the Jewish people and Israel and to advance democratic values worldwide. His efforts, Kravitz says, “were mainly concentrated on bringing together disparate groups from all ethnic and religious backgrounds and developing coalitions and relationships that ultimately would result in positive support for Jewish and Israeli issues.

“Marty Shultz, who is a corporate leader and communal and Jewish activist, and I were the only Jewish members on the Martin Luther King Jr. civil rights holiday committee,” Kravitz recalls. “I believed that the state had to go forward and recognize his significance to all of us. Dr. King was always supportive of Israel, and I was able to convey that message to people who really didn’t know.”

Once the holiday was approved, Kravitz joined the board of the MLK Jr. effort to bring together people across the board to expand the concept of intergroup harmony in the Valley of the Sun,” he says.

During his AJC tenure he also chaired the city of Phoenix Human Relations Commission under two mayors and fostered the creation within the police department of a commendation/ complaint document enabling people “to express themselves without fear of retaliation.”The document allowed for both the filing of complaints and follow-up investigations by the city’s equal opportunity department to judge their validity. “This provided a positive entrée into what had been perceived as hostile communities,” Kravitz says.

Additional commission accomplishments include work on the passage of an ordinance banning discrimination in rental housing based on ethnicity, sexual orientation and religion. He says his goal and focus throughout his tenure was “to connect the Jewish community with others.” He is especially proud of having worked with Latino leadership to arrange for information about Israel to be disseminated in both Spanish and English, and initiating such programs as Latino-Jewish seders.

Kravitz presently is a hospital chaplain for Jewish Family and Children’s Service, a job he shares with Rabbi Michael Dubitsky. The two divide the Valley in geographic segments, with Kravitz responsible for 11 facilities in Scottsdale and the southeast Valley. “If patients identify as Jews and are willing to see a clergy person, I visit them,” he explains. “The majority aren’t affiliated with anything Jewish, but they adamantly affirm their Jewishness.” It also is an opportunity, the rabbi adds, to spent time with and support and comfort family members.

Kravitz says his religion never has been an issue. “In my law enforcement capacity, I am referred to as ‘Rabbi,’ and that opens the door for me to explain Judaism when appropriate and to talk about Israel. So in a good way I see myself also as a teacher.” 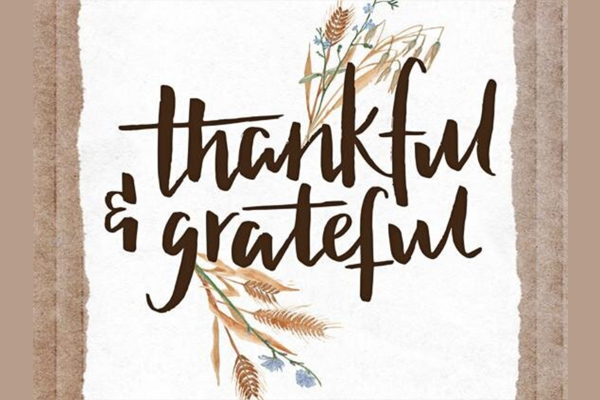 Are we truly thankful?