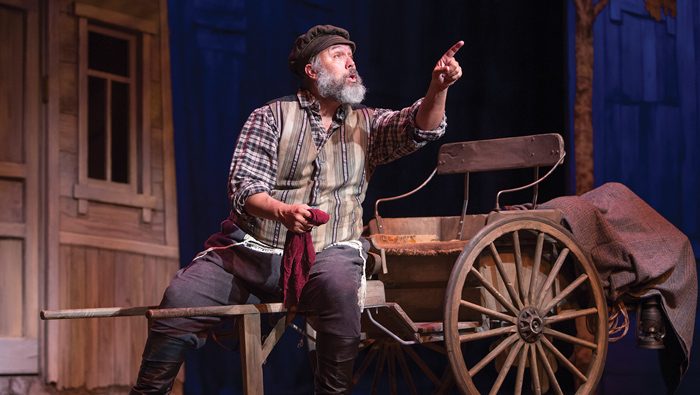 It’s not often someone takes three years to retire after the word is out. But such is the case with David Ira Goldstein, who has reached the 25-year mark as artistic director of Arizona Theatre Company – after he announced his retirement in 2013.

This time, he means it – but not before Arizona Theatre Company (ATC) takes on its biggest production in 30 years with “Fiddler on the Roof,” which wrapped a month-long run in Tucson this past December and runs through January at the Herberger Theater Center in Phoenix. This is ATC’s 50th season, its golden anniversary, so why not shoot for the stars with one of the most beloved and well-known plays of modern history, known to millions the world over?

“It’s simply one of the greatest musicals ever written – a work of genius with a great score and so many beautiful songs, each one a whistle-on-the-way-out-of-the-theater number,” says David. The play, which first ran on Broadway in New York in 1964 (to rave reviews – it won nine of its 10 Tony Award nominations), is based on the book by Joseph Stein set in the Pale of Settlement of 1905 Imperial Russia. Both sets of David’s grandparents came from Russia. He cites a little-known fact that there were 5.2 million Jews in Europe and Russia around 1905, 4.9 million of whom lived in Pale of Settlement.

What appeals to David is that “the book is based on no one particular story. Stein created a whole community. He put together characters and situations and managed to juggle four different love stories with overarching themes of tradition, faith, family, the diaspora and the tragedy of people being forced out of their homes.”

He notes that the story echoes the relevance of what is going on in the world today, referencing the news photos of the little Syrian boy in the back of an ambulance after the bombing of his village and the current talk of mass deportations from the U.S.

While it’s still a story with plenty of laughs and joy, David says that “my hope is that when people come and see the staging, they will get a sense of what it feels like to be forced from their homes. We Jews know better than most what that feels like.”

Like the best works of art deeply rooted in a particular time and place, David says that what distinguishes this production is that “I really tried to infuse it with a deep sense of the Jewish religion. The more authentic you are with rituals and behavior, the more universal it becomes.”

He adds that a third of the cast is Jewish and that everyone spent a lot of time studying the nuances of those rituals for their parts, making sure they are correct and realistic, with a distinctly Jewish flavor. ATC’s own special stamp on the production is to be as specific as possible so people recognize it as something David calls “truly human.”

Tackling “Fiddler” has always been on David’s bucket list. It’s an expensive show to put on, especially with a run in both Tucson and Phoenix. It takes 51 people to make the curtain go up for each show: a cast of 28, an orchestra of 12 and a crew of 11. It will end up costing more than $1 million, a testament to its popularity, especially with a large, loyal and supportive Jewish audience. As a nonprofit, David says ATC will be happy to break even.

Casting for such a production is a challenge and a joy. David cites the necessity for casting a wide range of types of people, for parts that range from children through adults to the elderly who add their “own particular tam, or flavor.” Some actors are from Tucson, others from Phoenix and Seattle. (David put on “Fiddler” in Seattle’s Village Theatre for the 2012-13 season.)

Eric Polani Jensen “is perfect for [the role of] Tevye, with his booming voice, sense of humor and enormous heart,” says David. Eric is half Hawaiian, which gives him what David calls “that dark, swarthy look.” Other outstanding cast members imbue their characters with their own particular experiences as immigrants.

When the topic of retirement arises, David sounds as though he is finally reconciled to the concept. He says he has loved the job of artistic director, but that juggling the role between Tucson and Phoenix has been a major challenge, noting that he has spent “half my life away from my wife, Michelle.” Michelle Robbins works with KJZZ, National Public Radio’s member station in Phoenix.

“Twenty-five years is a good, long run as artistic director,” says David. “I’m eager to give up the drive, but also to give someone else a chance.” He would like to direct and teach. He also looks forward to spending some time on the Oregon coast, in cooler climes. He and his wife have a small place in the town of Yachats, which has a winter population of 650; David and Michelle will round out the summer population of 2,000.

“I’ve had the long goodbye, but the search [for my replacement] is active, so that’s how I know it’s real,” says David. “And I got to do ‘Fiddler.’”