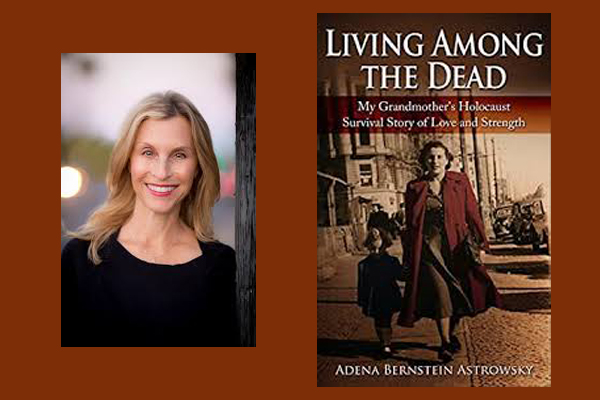 When Adena Astrowsky set out to write a book about her grandmother Mania Lichtenstein’s memories from the Holocaust, she assumed it would just be a valuable keepsake for her children and other family members.

Little did she realize that Living Among the Dead: My Grandmother’s Holocaust Survival Story of Love and Strength was going to be a bestseller in several Amazon categories: Jewish Holocaust History, Jewish History, Historical Biographies and High School books, and that it would be added to the Scottsdale Unified School District’s middle school curriculum.

While her grandmother didn’t hide the fact that she was a holocaust survivor, it wasn’t always easy to ask her questions. But Mania also realized that survivor’s stories would die with them if they weren’t shared and documented.

So Adena would spend time with her, asking questions and pulling out details from when Mania was in a labor camp and escaped to the forest, for months in the middle of winter, until liberation.

“I realized, as a trauma victim when you talk about the experience, you’re reliving it,” says Adena. “It would force her to have one to two weeks of nightmares and sleepless nights, so you had to pick and choose what you wanted to ask and when you wanted to ask it.”

Mania also adored her great grandchildren, so Adena would often bring them with her. “If I was driving her crazy with a poorly worded question, if they were with me, she would give me a little wiggle room and answer the question,” she jokes.
buy lopressor online

A unique part of the book is the addition of Mania’s writings and poetry. “She did write a lot in the 90s and early 2000s as a way of dealing with things,” explains Adena. “She was a beautiful poet, and I wish she had written more.”

In her effort to assimilate as a refugee, Mania spoke six different languages, with English being her last. Most of her writings were in English, but there were two writings in Yiddish and one in Polish that Adena had translated for the book, along with the original texts.

Originally, the title of the self-published book was Mother of Souls. “I got that from what my grandmother’s name meant,” says Adena. “I saw that (translation), and it was perfectly fitting. She was the ‘mother of souls.’ She was the only living mother, the only one to survive, and I also put a sunflower on the cover because it reminded her of her childhood.”

Mania passed away a month after the book was published, three days before Adena’s son and daughters b’nai mitzvah on March 15, 2017.

Adena knew that her grandmother would go from the hospital to hospice care, so she took her children to visit their great grandmother one last time. During their visit, Mania asked the children to recite their Torah portion for her.

As the children spoke, Adena noticed her grandmother close her eyes. “To me, she looked very at peace with everything. It was difficult and beautiful all at the same time.”

After her grandmother’s passing, Adena and her son Zachary (who wrote an award-winning science fiction book called The Uncontrolled) were at an author’s event when someone recommended that she seek a traditional publishing house to publish Mania’s story.

After a reworking a few things from the original story, changing the cover and the title, Living Among the Dead: My Grandmother’s Holocaust Survival Story of Love and Strength, was published on March 3, 2020.

Shortly after Living Among the Dead’s release, Adena was invited to do a book signing at the United States Holocaust Memorial Museum in Washington, DC.

“They had a beautiful display and signs all over the museum. The staff was wonderful,” remembers Adena. “It was emotional to see your name and your book there and the lines of people to meet you and take a picture. They told me it was one of the most successful book signings they ever had at the museum.”

That was her only in-person book signing. “From DC, we took the Amtrak to New York and stopped in New Rochelle to say ‘hi’ to my aunt, and the National Guard appeared a day later.”
buy lotrisone online

Adena looks forward to more book signings and events, but in the meantime, besides raising three active teenagers, she is busy with her work as a prosecutor with the Maricopa County Attorney’s office, where she has worked for more than 15 years.

She would like to see the county attorney get more involved with the hate crimes and bias incidents happening in our community. “I’m hoping my office will become more active creating resources or education because there are so many people experiencing things like this,” she says.

Adena taught Sunday School at Temple Solel for eight years, and after that, she co-taught a class on Holocaust studies.
buy mestinon online

“It’s about the students learning the history and the stories and talking about the survivors and resistance fighters and important people from the war,” she says. “About anti-Semitism and bullying and being an upstander versus a bystander. That was a great two years for me.”

For more information about Living Among the Dead: My Grandmother’s Holocaust Survival Story of Love and Strength and Adena can be found on at adenaastrowsky.com and mybook.to/ManiaL.