The first frost came to the Verde Valley School Farm in Sedona in October, five weeks ahead of schedule. The following day, as the sun beat down from a serene sky, Michael Spielman stood amid the wreckage and pulled out blackened stalks of cherry tomatoes, shriveled carrots and limp, feathery tulsi (commonly known as holy basil) to make space to plant new winter crops. Then he picked up a tall stalk of corn and peeled back the papery skin to reveal a rainbow of jewel tones. 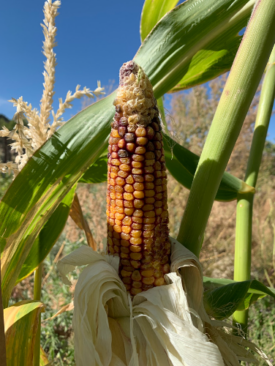 An ear of Tie-Dye corn, developed from Zuni and Colorado varieties. Photo by Corinna da Fonseca-Wollheim

“This Tie Dye corn I was able to save,” Michael says. He is especially proud of this variety that was gifted to him by a fellow independent farmer in nearby Cornville, who bred it over the course of 20 years, combining a variety of Zuni blue corn, heirloom sweet corn from Colorado’s Olathe region, and Hopi agricultural wisdom. Michael plans to set aside at least half of the kernels for seed. “I save things for flavor and abundance,” he says, “but also for their cultural history.”

The farm Michael created on under one acre of red dirt desert on this international boarding school campus has flourished in just eight years. It provides nearly all the fresh staples for the school’s cafeteria as well as regular shipments to food-insecure communities in Yavapai County. Students help make teas and salves out of herbs, which are sold at the local farmer’s market, along with seasonal delicacies.

But just as importantly, the farm has become a haven for students who come here to forage for strawberries or gaze at Cathedral Rock from the shade of a peach tree. “There is genuine excitement,” Michael says. “We are recognizing it is not just about food; it is about (the) experience.” He says that even though Verde Valley School has been able to offer in-person classes, students feel the loss of traditional leisure activities amid the increase in screen time.

“You have to balance that with direct immersion,” he says. “Seeing, touching, tasting – getting stung. Viewing where we came from.”

Michael stumbled into farming almost by accident. A native of Queens, NY, and the grandson of immigrants from Ukraine and Poland, he dreamt of becoming a poet, but his degree in creative writing led to an odd assortment of jobs including janitor, roofer, night watchman, bread delivery man and kayak ranger (in Alaska.) When his wife, Meg, a teacher, took a position at Verde Valley School, he seized the chance to start a farm. The school’s composting program had become so successful that it was producing more humus than could be used in the existing small garden. At this point, Michael had grown no more than a few tomatoes and snap peas for his young family.

But the landscape inspired him. “I call it getting Bell Rock’d,” he says in reference to one of the natural landmarks. “There is a deep, longstanding power in Sedona. And I got walloped by it.”

It took him a year to dig a gopher-proof perimeter fence. He read up on the history of the area, tasted heirloom crops from neighboring farms. But he says he did little systematic study.  “I approached it how I would a painting or a poem,” he says. “I didn’t want any noise, any input. I believed in this.” 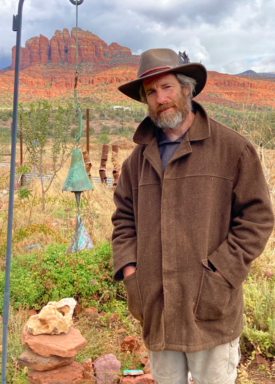 He befriended a Hopi farmer who gave him corn, melons and beans to seed his dream. “I recognized what a responsibility that was,” says Michael. “To have been gifted something that has been passed down for a thousand years.”

As the farm began to flourish, Michael’s commitment to seed preservation deepened. He has come to believe that seeds can learn. He gave an example of a variety of tomatoes that an Iraqi refugee had brought to America. Touched by the story, Michael gave them a try, but the first harvest was disappointing: the yield puny, the fruit mealy. The second year was just as bad. But something made Michael give it one more try, and the third year the Iraqi tomato became the star of the farm: plentiful and flavorful.

“Growing the same seeds every year, the plants adapt to your techniques,” says Michael. “They think.” Saving and replanting seeds – mixing seeds from multiple seasons and harvests in a single planting – is more work than buying commercial seed packets. But Michael believes it helps crops adapt to the changing climate in a particular soil. “It means coding things into our seeds that will then allow them to trigger survival responses at other moments in time – probably when I’m long gone,” he says.

Melissa Baskin, a senior boarding student from Phoenix, says she has seen the farm’s strawberries become more abundant and flavorful in the years she has been at the school. “I’ve been able to see how the fruit has evolved,” she says. “The farm has always been a place to explore and advance my knowledge, not only about food, but also other cultures.”

For Sukkot this year, she helped Michael erect the sukkah on the farm. With the restrictions caused by the coronavirus, she says, “I’m seeing it in a different light. It’s become more mystical.”

Beginning in February 2021, The Verde Valley School Farm will be offering a virtual series titled “Building a Desert Edible and Medicinal Backyard Forest” that will be open to the public.

Corinna da Fonseca-Wollheim is a contributing music critic for the New York Times and the founder of Beginner’s Ear, a series of meditation-based listening experiences. She is the mother of a current 10th grader at Verde Valley School.

'Farming a food haven in the desert' has no comments