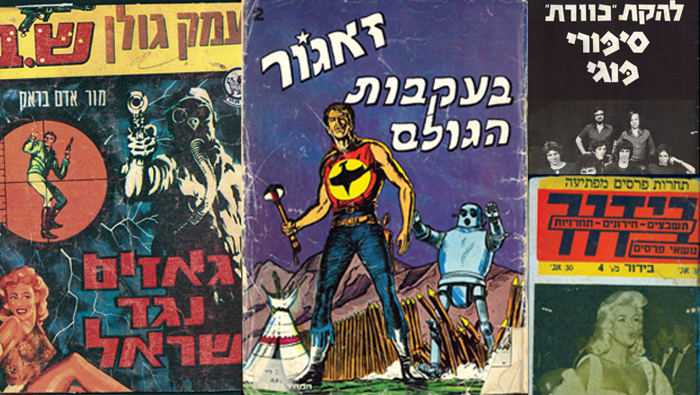 When we think about Hebrew literature, we don’t usually conjure up images of romance novels, detective serials or Westerns. But starting in the Yishuv of the 1930s, these pop culture staples were extremely popular, even as they were shunned by the intellectual establishment. A glimpse into the IsraPulp collection at Arizona State University Libraries offers a fascinating look at Israeli popular fiction.

This unique collection – the only one of its kind anywhere – is curated by associate librarian Rachel Leket-Mor, who started it in 2004 with Hebrew comic books. “I found it interesting that no other library was collecting comic books from Israel. But then I studied some more and found that there are other materials that nobody sees as valuable enough to be collected in a research library. This is really important. Those materials that nobody has access to become, in later times, much sought after materials and can teach us a lot about the culture – the real people that lived. Not everyone was reading the Torah and [Shai] Agnon and other highly esteemed authors. It’s not that I don’t value them, but people usually read several kinds of materials at the same time. So this aspect of the Hebrew culture was neglected in library collections and therefore in research. If you don’t have the raw materials, the primary source, you can’t do research.”

Almost 2,000 rare books and serialized booklets, from the pre-State period (1928) through the present day, are included in the IsraPulp collection, which is housed in special collections and may be viewed in the Luhrs Reading Room at ASU’s Hayden Library. Although these materials cannot be checked out, because many of them are rare or in fragile condition, Rachel says that the library is in the process of digitizing the collection to facilitate research.

The oldest Hebrew item in the IsraPulp collection is a satirical pamphlet published for Purim in Tel Aviv in 1928.  There are many titles dating back to the 1930s – including the first series of Hebrew detective stories, Sifriyat Ha-balash (The Detective Library). Many of the stories took place in mandatory Palestine, such as Ha-retsah Ha-mistori Be-Haifa (The Mysterious Murder in Haifa), from 1937.

Other popular genres included paperback crime novels, Westerns, romance, science fiction, comic books and adventure books for children. For the most part, these books were sold at newsstands and kiosks, not bookstores.

Many of the booklets in the collection were written in Hebrew as pseudo-translations. “Their textual makeup makes you believe that they were translated from American English, because that was hot, that was popular. And the local culture, in the ’50s and ’60s, was still very elevated in a way that wouldn’t allow for popular literature to be accepted into the culture,” Rachel says.

Authors of popular Hebrew fiction often wrote under Americanized pseudonyms, such as Mike Longshot and Victor Bolder, and were published by marginalized publishing companies that were constantly changing names to stay under the radar. The collection also includes magazines, like Bidur (Entertainment) – that featured puzzles, contests for prizes and pinups.

And what pop culture collection would be complete without pop music? If you remember learning the line dance to “Yo Ya” in the ’70s, you’ll appreciate the original program from Kaveret’s first “Sipurei Poogy” (“Poogy Tales”) concert in 1973, complete with photos and lyrics.

For more information about the IsraPulp collection at ASU Libraries, visit libguides.asu.edu/Pop/IsraPulp or contact Rachel at Rachel.Leket-Mor@asu.edu. She’s also happy to offer presentations about the collection.