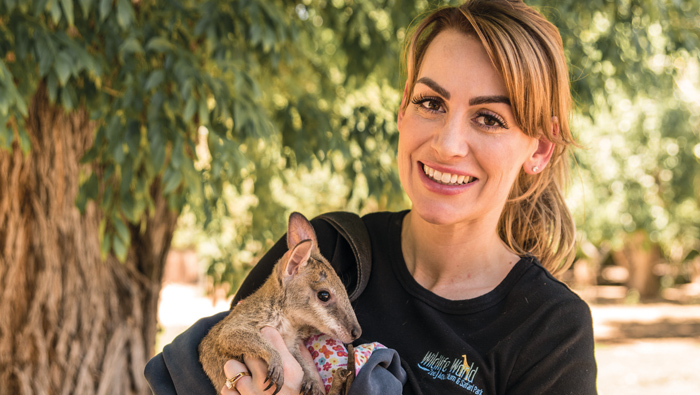 Genes are tricky. They affect everything from your blood type to intelligence. More and more companies are offering genetic testing for everyday consumers to trace their ancestry and their vulnerability to specific diseases. Most days you don’t give genetics much thought. That is unless you are Kristy Morcom, who found out she was BRCA1 positive at 18 years old.

Kristy wanted to be tested for a BRCA1 (BReast CAncer) genetic mutation as soon as she became an adult due to her family’s history. Her maternal grandmother, Christine Schoentrup, died in 1972 when she was 47 from liver cancer, although now the family believes it was breast cancer that had metastasized. Christine had six daughters (Sharon, Margaret, Marie, Jeanne, Teresa and Bonnie) and one son (Michael).

The oldest daughter, Sharon St. Peter, was diagnosed with breast cancer in 2004 at age 59. That same year Margaret Ronstadt, who was 57, was also diagnosed.

Marie discussed her two older sisters’ diagnoses with her doctor. He suggested that she be tested for the BRCA1 gene mutation. She was tested and received a positive BRCA1 result. Sharon and Margaret were also tested and had the same result as Marie. When the three remaining sisters received their results, the only one that tested negative was Bonnie Morse. Six sisters, five positive BRCA1 test results.

Kristy (who is now 31) wanted to find out as soon as she was able if she too carried this genetic mutation. “When I turned 18 I got tested and found out I was positive,” she says. “So, since I was 18 it was always in the back of my mind that I would have to plan my life out accordingly.” She met with an oncologist, Dr. Jerry Olshan, who helped her make a plan that included a double mastectomy and hysterectomy, surgeries that both her mother, Teresa Waddell and her aunts Marie George and Jeanne Ried elected to undergo since receiving their positive results. “The doctors wanted me to move forward with the surgeries as soon as I was done having children. The sooner I had the surgeries, the less of a chance I would have to develop cancer,” explains Kristy.

When Kristy first met with Dr. Olshan, research on the BRCA mutations was relatively new. In 1990, geneticist Mary-Claire King discovered the gene and then in 1994, scientists at the University of Utah were able to clone it, increasing the ability to understand how mutations in it led to breast cancer. One of the pioneers of genetic testing and BRCA research at that time was Myriad Genetics in Salt Lake City, UT.

Kristy’s blood sample was sent to Myriad for the BRCA analysis. During one of her meetings with Dr. Olshan, he shared the news that Myriad was able to trace her particular mutation back to the one common in those of Ashkenazi descent. Being young and not understanding the impact of this information, she just thought that it meant she was linked to a group of people from Eastern Europe. “I didn’t understand the connection. I was always so concerned with the cancer aspect of it; I didn’t put the pieces together,” she explains.

GETTING ON WITH LIFE

Kristy tried to lead as much of a normal life as she could, going to community college and even moving to Wyoming briefly. She returned to Arizona because she was homesick and to follow her passion for working with animals.

Her primary focus when she returned was to get the prerequisites she needed to attend the Exotic Animal Training and Management Program offered at Moorpark College in California.

“I went to the Wildlife World Zoo, Aquarium & Safari Park to volunteer and gain experience – to increase my chances of getting accepted to Moorpark,” explains Kristy. Shortly after beginning her volunteer work, the zoo offered her a paid position. “I started in the gift shop for a couple of months until a position opened up working with animals. They then hired me into the education department where I worked as an education specialist and animal trainer.” As an education specialist, Kristy led the wildlife encounter shows, hosted the lory parrot feeding and traveled to schools, libraries and events with different animal ambassadors educating the public about animals and conservation.

Kristy met Justin Morcom in 2009. Their relationship became serious quickly, and when she knew they were going to get married, Kristy again met with her oncologist, “So I could map out what the next part of my life would look like.” They married in 2010 and welcomed daughter Ivy into the world in 2012.

“After Ivy was born, I met with my oncologist again, and he told me that I shouldn’t wait to have a second child, that if it was something I wanted, I should move forward with it right away,” Kristy says. They had just had their first child and like most new parents were adjusting to life with a newborn. Thinking about when to have the next one wasn’t yet a topic of conversation. They often weighed the pros and cons. “We were worried if we didn’t have a second child and I moved forward with these surgeries that we would regret it later,” explains Kristy. So they decided to go forward with the plan to have another child. The couple welcomed twin boys in 2014.

Her first surgery was twofold. The first surgeon performed the double mastectomy, then the plastic surgeon inserted the spacers, which are deflated implants. That was the worst part of recovery for Kristy. “I went in every other week for a couple of months, and they poke you with a syringe and inject saline [into the spacers]. They are slowly expanding the space where the implant will go. They are stretching the skin and the muscle because the implant goes under the muscle,” she says. The muscles help support the implant and make it easier to detect cancer in the future.

Kristy has an excellent support system within her family, so she was able to take the downtime she needed to heal. “The hardest part was not being able to lift my kids for months. I was able to snuggle them, and I was surrounded by family who was able to do all the ‘heavy lifting,’” she jokes.

Her second surgery would also be a double procedure. This time the plastic surgeon would insert the breast implants, and her gynecologist would perform a bilateral salpingo-oophorectomy – a procedure where the surgeon removes the ovaries and fallopian tubes but leaves the uterus intact. “With my gene mutation, right now there is no research that suggests that I am at an increased risk of developing uterine cancer, so they left it,” says Kristy. By not removing the uterus and combining both surgeries at once rather than individually, allowing Kristy a shorter recovery period, which was advantageous with the little ones at home.

She did have one unexpected surgery though. She had been home a couple of weeks from her last surgery when she started experiencing terrible abdominal pain. “The hospital told me that I was just stressed out – being such a young mother and having such radical surgeries and all. I kept trying to tell them that’s not what it was,” Kristy recalls. After a misdiagnosis of ulcers, she went to another hospital and was admitted immediately for emergency gallbladder surgery. “Afterwards, I felt like a million dollars!”

One of the drawbacks of her surgery is that it has thrown her young body into early menopause.

But being BRCA1 positive, she is leery of doing hormone replacement therapy. “It’s a gray area. Some doctors say you can do hormone replacement and some doctors say you absolutely can’t,” explains Kristy. “I found that you have to do a lot of research and educate yourself and find out what works best for you. There is no black or white answer. I figured if I can get through without doing any of the hormone replacement – that is my safest bet. They are just not sure of my chances of getting cancer because I still have some of those cells.” Kristy says that returning to work has also helped her symptoms.

She took about a year and a half off, part of it was due to bed rest from her pregnancy with the twins, and the other was her recovery time from her surgeries. Kristy is currently the director of media relations at the zoo.

Her work entails doing several television segments each week, visiting the local stations with some of the “animal ambassadors” from the zoo. Once of these ambassadors is Kristy’s personal pet, Snicklefritz. “Snick” as Kristy calls her, is a kinkajou, a nocturnal mammal native to Central and South America. Kristy has a special permit to own Snick, and she is quick to say that “kinkajous do not make good pets!” Kristy is not a proponent of people owning exotic animals due to the fact that exotic animals have different needs than domestic pets and people do not know how to care for them properly.

All of her children love animals and enjoy coming out to the zoo, and she is making sure to educate them on everything from animal facts to conservation efforts. “Ivy knows more about animals than your average adult,” jokes Kristy.

Now, with the surgeries behind her, Kristy has started doing her research and discussing her Jewish heritage more with her aunts and her mother. “Once my family found out what the Ashkenazi connection truly meant and started discussing things, it all made sense to them,” she says. “No one was aware of that lineage.”

Even though her mother and aunt Bonnie were young at the time of their grandmother’s death, the older sisters knew that she had come to the United States from Germany with her parents. She met and married an American man and assimilated into her life in the U.S. She raised her children with no religious foundation and would never discuss her life in Germany before emigrating.

This fact has driven both Kristy and her sister Cody Crosier (who has tested negative for BRCA1) to find out more about their Jewish background. They have begun to look into their ancestry, hoping to find out more about their great-grandparents and the mysterious life that they had before leaving Germany. “I’m excited to look into it more and embrace it,” says Kristy of her newly discovered Judaism.

She is also embracing her health and accepting the changes in her body. “Honestly, my body image and the way that I feel about myself now is better after all these surgeries than it was prior. I had really good doctors, and they did a phenomenal job,” admits Kristy. “I used to be insecure; now I feel a lot more confident in my self-image. It’s crazy – I thought I would be a lot more insecure after the surgeries.”

There is a lot of controversy around whether or not people should have these tests, especially at such a young age. “Knowing since I was 18 helped me come to terms with all the surgeries I was going to have to go through,” Kristy explains. “I had plenty of time to digest it and to get over the fact that I was going to have to go through these surgeries. Seeing my aunts get cancer and one was able to beat it, while my other aunt wasn’t so lucky. Seeing what she had to go through – it made my decision really easy.”

She felt fortunate that they had a test out for the BRCA1 gene mutation and that once she knew that she was positive, knowing she had options about how to deal with it.

“The surgeries are hard, but would have been much harder if I was sick,” she reflects. “Having to deal with surgery not knowing if you were going to survive the outcome, I can’t even imagine…”

Fortunately, now she doesn’t have to. 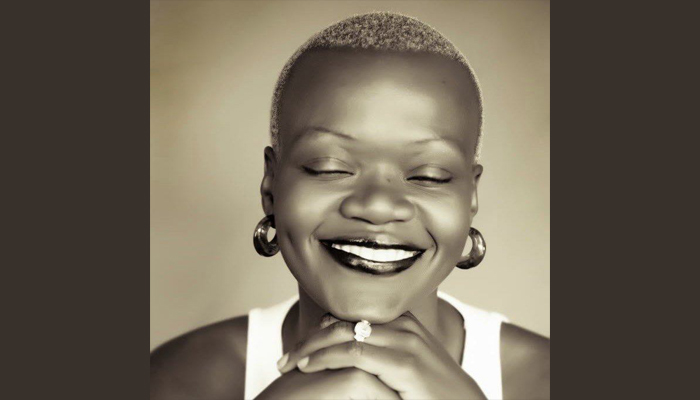 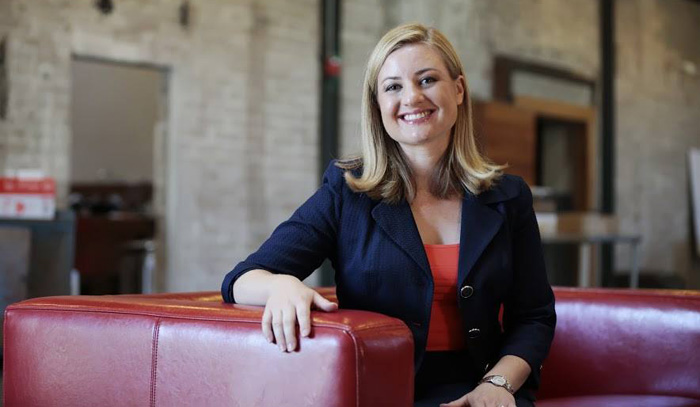